By James Gordon For Dailymail.com

A first-class plane passenger was arrested over claims he branded a flight attendant a ‘f*g’ for refusing to serve him more booze.

Christopher Alexander Morgan is also said to have called the unidentified Delta worker ‘queer’ and whacked him with a cabin phone on the flight from Atlanta to Phoenix on April 22.

The drama is said to have begun after Morgan reclined his chair before take-off, then refused to raise it again at the request of the cabin crew.

He is said to have grown even more irate on being refused a second alcoholic drink after take-off and then hurled homophobic slurs before allegedly grabbing a cabin phone to use as a weapon.

The incident left the plane’s crew so fearful of Morgan’s erratic behavior that they guarded the cockpit for the duration of the flight.

And after he was arrested by the FBI on landing at Sky Harbor Airport, Morgan is said to have readily confessed to being a homophobe, the Daily Beast reported.

Morgan now faces up to 20 years in prison on felony charges of interference with flight crew members or attendants.

Morgan, who was sitting in the first row of first class is alleged to have called one of them a ‘f*g’ after being denied an alcoholic drink. File photo, A Delta Airlines Boeing 757 passenger aircraft taxis toward the runway at Phoenix Sky Harbor airport

The affidavit as seen by The Daily Beast notes how the argument began before the plane even took off when Morgan who was sitting in the first row, in seat 1D, ‘reclined his seat all the way back and refused to put on his seatbelt’ for takeoff before becoming ‘uncooperative [with the fight crew] and would not comply with their instructions.’

Once airborne, Morgan ordered an alcoholic drink but was told he could only have soft drinks which angered him further.

‘Morgan called one flight attendant identified as H.D. the f-word and a ‘queer’ and threw a glass of ice at H.D.,’ the affidavit details.

‘When passenger R.O., who was sitting in seat 2G, said something to Morgan to deescalate Morgan’s display of aggression, Morgan became angry with the passenger R.O. and held the glass he was holding up to R.O.’s face.’

Flight attendant H.D. then went into the galley to call the captain over the intercom to explain what was going on. 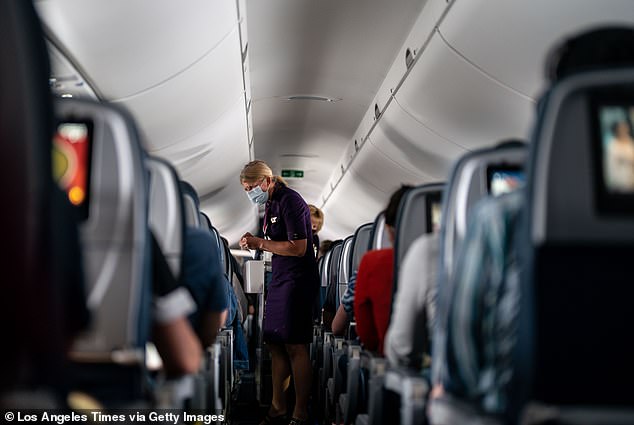 ‘According to H.D., Morgan then got out of his seat, grabbed the telephone from H.D., and hit H.D. in the chest with the telephone. Passenger R.O. reported that he heard Morgan call H.D. a ‘f*g’ and that he observed Morgan take the airplane phone from H.D. and throw it at him.’

The flight attendants were so disturbed by what they had witnessed, one stood guarding the door to the flight deck for the rest of the flight ‘out of security concerns for the flight crew, after H.D. reported that he did not know what Morgan might do next.’

Morgan was swiftly arrested upon arriving in Phoenix whereupon he attempted to justify his actions saying the fact ‘the flight attendant was homosexual… and it made him uncomfortable,’ according to the affidavit.

Morgan has denied all allegations of assault and said that he never touched the aircraft’s intercom telephone.